Home » Les Arcs by Rail - The Perfect Way to Travel!

Les Arcs by Rail - The Perfect Way to Travel! 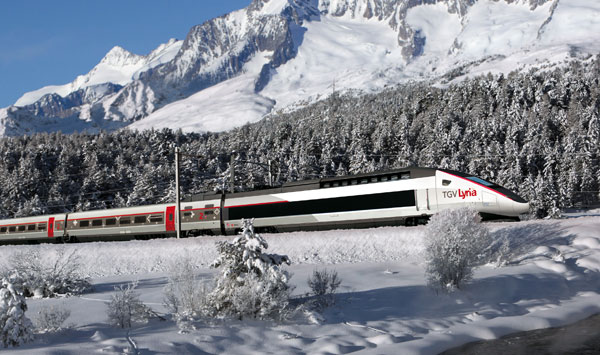 When you think about getting to the French Alps for a ski break by way of the usual flights, it’s hard not to envisage something of a nightmare scenario. The reason being that hot-footing it through airports, on and off planes and then onto your final destination with a bus or train transfer doesn’t exactly sound like a thrill a minute…which it isn’t.

By contrast, there’s something vastly more appealing about the idea of travelling by train. Taking the snow train to the Alps is less a process of suffering and rushing, more one of opulent relaxation and your holiday starting early. Seriously – would you rather spend two hours wandering around an airport hoping to God that your plane isn’t delayed, or spend the same time sipping a glass of wine while tearing-it across the French countryside?

Much of the time, the reason folk steer clear of the snow train is because they think it’s too complicated. Well, we’re here to tell you otherwise – it can in fact be way easier than any other of transport and on the whole just as quick.

Basically, if interested in heading to Les Arcs by the snow train, you have three primary options to choose from:

If you’d like to enjoy the journey and get your trip off to the best possible start, you can always travel in style on a direct daytime service from Ashford or London straight to the French Alps. You set off on the morning and arrive at your destination early evening, having prior to arrival booked your final transfer from the train station to your resort of choice. It’s a brilliant way of arriving having already had a blast on the way there!

The second option is essentially the same service as the above, though operated overnight rather than during the day. If you’re the kind that can easily get to sleep in a non-reclining Eurostar seat, then this is a brilliant way of arriving first thing in the morning, fully refreshed and with a full extra day to spend on the slopes.

And finally, depending on how much time and money you have to spare and also what else you’d like to see along the way, it’s perfectly easy to get to Les Arcs and really anywhere in the French Alps by first travelling to Paris and then taking a regular scheduled service to your final destination. Get it right and you could be looking at the most cost-effective option of all, but at the same time it might take you a fair bit longer to get where you’re going…plenty of time to sit back and take in the scenery, though!

Ever since the Snow Train and its infamous disco carriage stopped operating in 2010, people have been a little put-off but the idea of trying their luck with the trains. Take it from us though when we say the first time you experience the difference compared with the horrors of the average airport, you might just keep your feet firmly on the ground every time you hit the slopes in future!